As a youngster I always thought that as the years went by I would inevitably slow down and sport would become a thing of the past. In the event the opposite has happened and I am constantly tempted to try new things. Indeed my adventures seem to have become more and more ambitious as time goes by but as age takes its toll, learning new skills can be problematic. 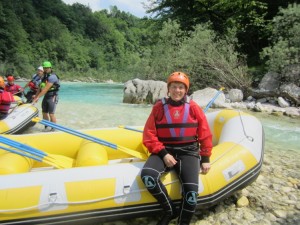 It is generally accepted that as you get older you are slower to learn and I think my efforts have proved that this is true. It is, however, more a case of training the body than the mind. I am finding that I can perfectly well comprehend what I am supposed to do but it is getting harder to get my body to cooperate! Things that I know I would have been able to get to grips with quickly as a youngster now require endless repetition to master. My body simply does not adapt to new movements as well as it used to and it is frustrating. This problem has been most evident in my attempts to learn to ski. As a child I was swift to pick up ice skating but now skiing is taking what seems like forever to master. I am getting there slowly and have progressed beyond the Bambi on ice stage but what would have taken minutes is taking hours.

Unless you are extremely lucky the passing years take a toll on your body and various conditions develop which can be a genuine obstacle to participating in sport. I now suffer from gout which affects my joints and so the rigours of skiing causes a great deal of pain in my feet and knees. This means that I have to stop frequently to rest which in turns disrupts my rhythm and slows down the learning process. The gout was also problematic when I embarked on my second attempt at hydrospeed this year. In addition to bashing an already injured toe on a rock, my feet were really struggling under the pressure of using the flippers and I ended up having to quit half way down the course. White water rafting proved to be a good bet though and that is something that even the comparatively decrepit can cope with!

I think I have shown that even the over 50’s can take up new sports and learn to be proficient it just takes a lot longer to master things. You have to be determined and prepared to persevere but you do get there in the end. I used to fear ridicule from younger participants but they are largely quite accepting of older people and generally seem impressed that you have given things a go.

On an amusing note I have discovered one further obstacle that age throws in your way. When participating in adventure sports it is often necessary to sign some form of waiver and I have been caught out on several occasions with this due to not being able to read the thing! I now need reading glasses and if I have had a senile moment and forgotten them I have no idea what I am signing!