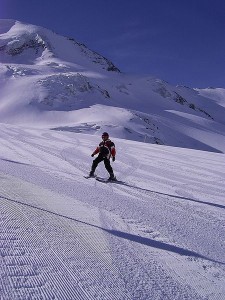 I have just taken up skiing and on my first trip I was astonished at how many people seemed to be more concerned with their personal appearance than improving their skiing. Admittedly most of the posers I saw could ski perfectly well and certainly better than I could, which wouldn’t be difficult, but they seemed more concerned with their fashion than their sporting ability. As they lounged around polishing their Ray-Bans I wondered if they were staring at me because I was wearing deeply uncool attire or because I had just dramatically face planted the snow for the umpteenth time!

Skiing is decidedly not a cheap sport. There is a lot of equipment and clothing to purchase and lift passes to pay for. By the time you have bought your skis, ski boots, poles, helmet, gloves, jacket and salopettes you need the holiday to recover from the shock of the expenditure. For many people skiing is a once a year treat and so they are going to struggle to get good value from their investment even with bargain buys. Spending a fortune regularly on the latest in thing seems to me to be madness. These people clearly have more money than I do! Personally I was far too busy trying to avoid a near death experience to worry about what I was wearing or what anyone else thought for that matter.

Perhaps I should have felt embarrassed about my choice of ski attire but I found my inability to ski much more humiliating. When I was taken out at the knee caps by a kamikaze snowboarder he clearly wasn’t concerned about my inexpensive jacket. He just wanted to know that he hadn’t killed me on impact. Thankfully I survived the incident which unfortunately took place in front of a row of fashionistas relaxing in deck chairs by the side of the piste. I didn’t need to worry about what they thought either as they were all far too busy doing their hair and posing for pictures!

The great irony is that nobody really cares. The sensible people were getting on with having a great time and improving their techniques. The genuine enthusiasts were getting the most out of their time on the slopes and the budding fashion icons were of no interest to anyone except themselves. I don’t know who they were trying to impress but whoever it was they failed miserably.

At the end of the day skiing is a sport not a fashion parade. Nobody wants to look ridiculous but you can present yourself perfectly well with reasonably priced ski gear. It might not be the height of cool but neither is posing when you should be having fun. I admit that even I had a laugh at the expense of some people who were wearing those 1980’s style all in one affairs. They made them look like overgrown children in kids winter clothes! There is a middle line, though, and my inexpensive but perfectly presentable ski wear served me well. The only people laughing at me were the ones who witnessed my accidents and they didn’t have to look for very long to see one of those!