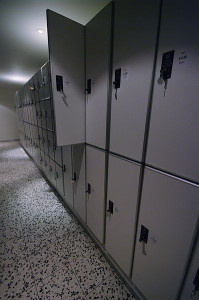 If you are playing sport then you are limited in what personal items you can take with you. That wasn’t such a problem in the old days as most people’s valuables would be confined to their wallet and car keys and kids wouldn’t even have those. These days, however, it is a different story with the proliferation of mobile phones, tablets, iPods and other gadgets. Most people have quite a lot to carry and also to lose which presents a dilemma. Do you take your things with you and if you don’t where do you put them?

The Trouble with Lockers

Most sports facilities have lockers in which you can secure your personal positions but sometimes secure is not what they are. We have all heard stories about things disappearing from lockers at school and just about everywhere else and the thieves seem to be interested in anything they can get their hands on even if it is of little value.

Take It or Leave It?

I always have an internal debate when I visit the indoor skiing centre. I don’t really want to ski with a phone in my pocket in case it gets smashed in an accident or I injure myself falling on it but I never feel very happy leaving it in my locker. Obviously anything that is stolen can be replaced and at no cost if your items are insured or if it is bank cards that have gone on the missing list but it is all so much hassle! I also have an irrational fear of losing the locker key!

It is hard to know what to do to solve the problem. With some items of kit I guess it would help if you have it personalised. People might fancy pinching a kit bag or some equipment but perhaps not if it has someone else’s name indelibly printed all over it. Gadgets are a different matter though. Most of the things we carry are small and can be easily smuggled out of the building and they have a significant value on the black market.

Sports facilities could really help if they installed lockers which were a great deal harder to break into. Most of the ones I use could be sprung by a five year old! There would be a cost involved which would inevitably be passed on to the customers but it is probably a price worth paying for that peace of mind.

Personally I wish all our gadgets and gizmos had self-destruct mechanisms which could be activated in the case of theft. That would put people off nicking them in the first place and it would be even better if they subjected the thief to some acute pain when the function was used! This might sound a little excessive but it is a sad world we live in when it is not possible to leave a phone in a locker without the fear of it taking a walk as soon as our backs are turned.

I guess someone will come up with a solution one day but until then it is a risk leaving anything in a locker.  Perhaps we should all get used to leaving home occasionally without our gadgets!