I discovered the joys of watching football in Italy almost by accident. Back in 2001 my team, Liverpool, drew Roma in the last 16 of the Uefa Cup. I had always wanted to see the Stadio Olimpico as it had been the venue for two of Liverpool’s European Cup finals. I had missed both glorious victories and was keen to get a taste of what it would have been like to be in the stadium. The draw presented me with my opportunity. 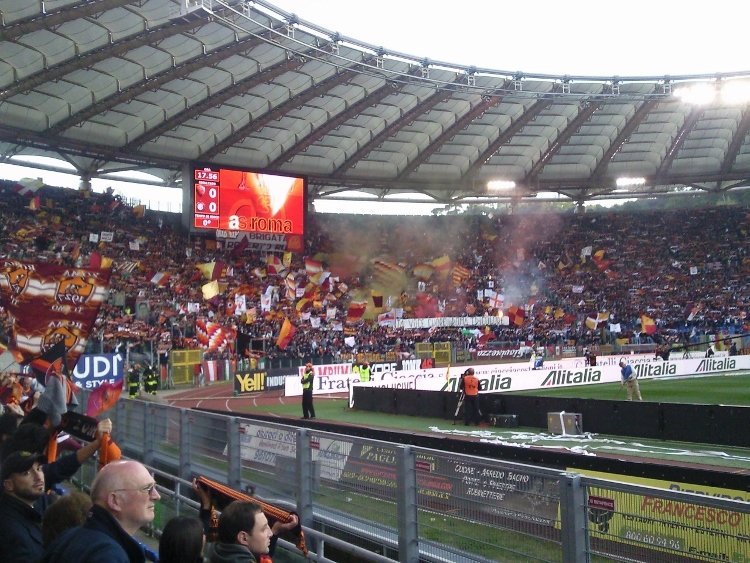 I had only ever travelled overseas once before for a football match and that was for the 1985 European Cup final at the Heysel Stadium in Brussels. My experiences that night had understandably put me off further forays but I felt that the Rome trip was one I needed to make. I managed to get my hands on a ticket and a few weeks later I was in the Eternal City enjoying the historic sites in advance of the match.

When the time game to make my way to the stadium I was beside myself with excitement. This was the ground above all others that I wanted to see. We pulled up outside the ground in our coaches and were taken to an area behind security fences to disembark. The atmosphere was incredibly hostile and it reminded me of the 1970’s in the UK. I walked up the steps into the stadium and just stood there in awe. What a cauldron of excitement! You could feel the hatred in the air and I was beginning to wonder if it might be a good thing if we didn’t win. Somehow we all had to get back safely to our hotels but it felt like we would be lucky to make it beyond the limits of the stadium.

I didn’t think I needed to worry about winning as Liverpool had been playing quite poorly and Roma were top of the Italian league. A Roma win looked inevitable I just hoped we could escape without a complete pounding. In the event the first half delivered few thrills and no goals but the second half was a different story altogether. A few minutes after the break Michael Owen scored for Liverpool and I was so shocked that I almost forgot to celebrate! When we scored again I just couldn’t believe it. Roma then launched an all-out assault on our goal throwing everything but the kitchen sink at us but failed to score and we won the game. We were locked in for two hours for our own safety and by the time we emerged the area around the stadium was almost deserted. I still didn’t particularly fancy the bus ride and walk back to the hotel but we made it back in one piece.

I had a splendid stay in Rome. The city was incredible, the match amazing and the majority of the people were very friendly especially one of the guys at the hotel who was a Roma fan but remained friendly even after we won. I was very surprised a few months later when he emailed me to ask if I would be coming back to Rome to see more football. The idea hadn’t really occurred to me but I thought it sounded like a great plan. Liverpool had a lot of history with Roma so why not support them too? I booked a trip to see a Serie A game against Juventus and it was a spectacular experience. So spectacular that I booked yet another trip.

I have now been visiting Rome for 12 years and the guy from the hotel is one of my best friends! Football in Italy is such a wonderful night out and you can enjoy the delights of the beautiful cities into the bargain. You can enjoy great architecture, amazing history, shopping for boutique clothing and then a brilliant football match. What more could you possibly want? It is a lot safer being on the home side too! Give Italian football a try. It is a completely different experience to footy in the UK and affords the opportunity to visit many truly spectacular places.