Whether you’re a commuter, an avid riding enthusiast or simply fond of your bike, it cannot only be inconvenient and costly but also devastating and disheartening when you find your bike has been stolen. So what can you do to try and get your prized possession back? And if you’re looking for precautions to undertake now, then what can you do to prepare yourself should you find yourself in this situation in the future? 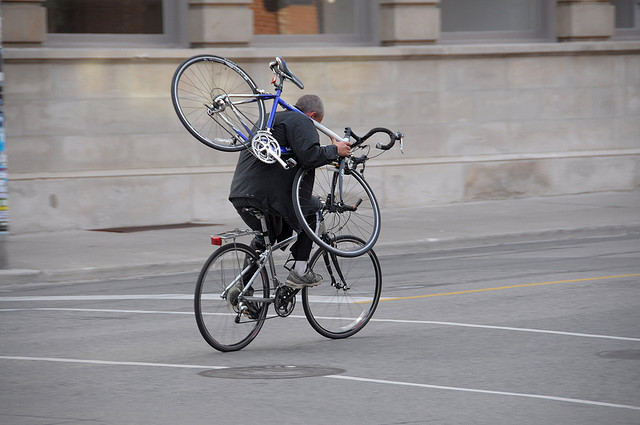 Bike Piggyback by Chris Dustin via Flickr (CC BY 2.0)

Should you have had your bike stolen then the first thing to do is to remember that you’re not alone. It’s a shame but a good number of cyclists find themselves in the same boat as you each year. In fact you can find data on bike thefts at Stolen Bike Stats. You’ll notice that the Metropolitan area had 23,146 reported bike thefts in the 2011/2012 period yet Stolen Bikes say that “It is largely accepted that only 1 in 5 bike thefts are reported to the police, therefore the bike thefts figures below can be considered 5 times higher than reported.”.

As the majority of people are decent and there’s a good fraternity amongst cyclists a number of websites have been set up over the years to help reunite cyclists with their bikes whether after being stolen or by providing pre-emptive action. One such website is Bike Register which allows you to register your bike with the UK’s largest bike registry. The benefits of this scheme are that you have the ability to mark your bike as being part of the scheme and that the police have access to your details on the secure database. The bike being marked goes someway to immediately reducing the risk of bike thieves stealing it, as a quick risk-free turnaround of stolen goods is obviously preferential.

Another example of a good website which might be of some help in the days following your bike’s theft is Bike Shd. bikeshd.co.uk constantly crawls EBay and Gumtree scraping all of the new bike listings on these marketplace websites as both avenues are popular with bike thieves for reselling. A quick look at this website may help you find your stolen bicycle or Fixi bike, at which point you can ask the police to investigate. If you find your bike stolen you can register it lost on a site such as stolen-bikes.co.uk who often tweet to a wide audience on recent thefts.

Of course thieves require a market to which to sell. Any conscientious bike shopper looking for a secondhand ride should check out websites such as checkthatbike.co.uk. Check That Bike helps you to determine what past your possible purchase might have and if it has in fact been stolen. The motto “if it seems too good to be true, then it probably is” is perfectly suited to buying bikes secondhand, so it’s always worth checking that bike if you have any suspicions.

Have a look online for more useful resources aside from those already mentioned.