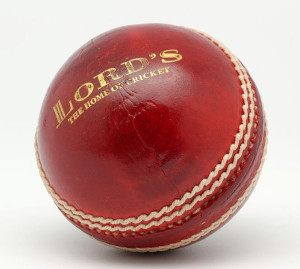 Cricket equipment has changed dramatically down the years as new technology and materials have enabled the production of increasingly more practical and efficient clothing and protective gear. The one thing which has remained relatively unchanged is the cricket ball. Players from centuries ago would still recognise today’s balls. Increasingly aggressive and athletic play has forced players to wear more and more protection to defend themselves against the ball but the projectile itself has changed little.

Cricket balls are formed from a core of cork which is bound tightly in string and then covered with leather. The best balls have a four piece covering whilst cheaper balls may have only two pieces of leather. The leather concerned is cow hide and is stitched together with the characteristic raised seam which bowlers use to turn the ball. Due to the variance in the leather and thread used to stitch the ball, no two cricket balls are exactly the same. They may look identical but their behaviour can vary greatly.

The cricket ball is traditionally dark red and most balls are still this colour but a white ball is now used in the professional game when playing under floodlights to make it more visible to the batsmen. There have been experiments with other colours but these were largely unsuccessful and so the dark red ball is still the one primarily used at all levels of the game.

In the early days of the game the balls could vary quite considerably in size. Until 1744 the rules of the game had not been written down and all balls were fashioned by hand. The 1744 rules decreed that all balls should weigh between 155.9 g and 163 g and in 1838 the rules were amended to state that the circumference of the ball should be between 9 inches and 9 ½ inches. A further amendment in 1927 changed the required circumference to between 8 13/16 inches and 9 inches.

Whilst all cricket balls look pretty much the same and their size and weight varies little, their behaviour can be different. Due to the unique properties of each piece of leather and the thread used to stich the ball, each piece has its own character. As the ball is used it becomes worn and rough. Bowlers rub the ball on their trousers to polish one side in order to make the ball swing in the air. They are permitted to do this but cannot use anything other than their clothes and saliva to affect the ball. There have been many ball tampering scandals over the years with players using gravel to treat the leather and picking at the seams with their fingers but that just isn’t cricket!

Whilst the ball has changed little, developments in the way it was bowled have greatly altered other aspects of the game. The ball was originally propelled underarm but once overarm bowling was legalised the action has become more aggressive leading to frequent injuries and even fatalities. Batsmen and close fielders now wear protective equipment in the shape of helmets and arm, chest and thigh guards. Despite this there are still injuries when amateur players fail to protect themselves adequately or in freak accidents where other players and spectators are hit by the ball.